The Stonewall Pride festivities are in full swing! The Saturday part of the party was great, so many people from all over the world coming together, I enjoyed that very much. Seeing members, no matter how different they are, interacting with love and respect, was awesome.

This thread is for everyone, to share impressions and thoughts and just about everything you want to say about our Pride Party. Maybe you want to add something about a conversation from the party? Maybe you wanna tell us what you liked (or disliked)? Or you took that great screenshot you want the whole community to see? This is the thread for all of that!

Happy Pride. Thank you for the compliments about the music, it was a pleasure to be your DJ. If you want to check out any of the songs again, this Google-spreadsheet contains links to all the play-lists used during SGN PRIDE21:

July 18 2021
There was a question about one German rap song by Sookee & Tapete called "ProHomo" and what exactly they are talking about. So, this morning I sat down to make a quick translation of that text:

Hip Hop has problems, because a big part of this scene
doesn't want to accept that men also desire men.
They want to keep them from living their love.
This track wants to move something, I am pro and not against!

This is Pro Homo, Hip Hop (the music) is not to blame
the society has kept that door shut for a long time
because the man is seen as a man when the desire he feels
is performed with dominance and never touches another man.
This norm goes even further, it includes clothing and much more,
men shall never fail it otherwise it goes "are you gay or what",
a bitter doubt on coolness and strength.
This phenomenon doesn't only exist in baggy-style, it also wears ties
in all parts of society, as single and especially in crowds,
the manager, the keeper at the door, look the comrades are shouting as brothers in a choir.
But also in the center, on the left and in houses of worship
there are rigid pictures of manhood who hope that nobody sees how fragile they are
which actually makes them easy to deconstruct.
All these lame ducks seem to think that the phallus is a heterosexual and they own it...
Boys, turn on your brain,
if you are real men you are cool with queer, everything else is crocked.

And then I hear them say that everything is okay nowadays
because there are some prominent gay men and "Brokeback Mountain"
but I marvel at the persistence of the idea of an order between women and men
which is dripping too much with tradition to keep it.
Identity is important and all, but 'the one and the other' is also hiding traps
What do we think we know?
What are only cliches?
The stereotypes take up ground.
How do they wanna know who fucks whom when
if they say they are so disgusted by it...
And oh by the way, there's also everyday life, and Ramadan and Hanukkah or Christmas
Just imagine: Gay people are just as kind or dumb as everyone else,
that's just how it is.
Everyone claims respect and tolerance for themselves
but then somehow that doesn't count for others...
If God really exists, God loves all humans.
If God really exists, God sees no borders.

(Tapete's part)
Don't tell me about the pope,
the pope is a German homophobic old man who employs Holocaust-deniers
that bloke hunts witches and reintroduced the exorcism.
Don't believe this dark medieval age stuff, give them the middle finger instead!
Give contra to the fascists, change your vocabulary
because you are playing into their hands with hateful homophobic words.

Have you ever been deeply in love and thought this was 'the big one' ?
There simply are no differences in same-sex relations, only more problems
because showing the love to the outside is still called 'having a coming-out'
a 'coming-out' implies the crossing of a border in a society with too little time.
This is not Genesis, forget Adam and Eve,
This is about Eve and Ella
and also about Adam and Peter
This is not religiously or genetically caused
This is just sex and love,
so let us start over (let us start over, let us start over)

all winners of the raffle will be contacted in the next few days or sent your prizes through ingame mail.


all the above winners will get SWCs added to their accounts within 24 hours.

Thank you from the Stonewall Resources Dept

Warriors of Nagh reD and Volunteers from Stonewall! Our hunt on Risa was a total success. We've done five hunts, each special and exciting, in which we found the qa'meH quv four times. Songs worthy to tell about our deeds will be written and sung, and the qa'meH quv who managed not to get found will even get an opera! Here are the details:

L
Winner @LaceyRand, representing the L-word in all it's wonderfulness!

G
Winner Akrilon / @Voleron for being the only gay man who came out for the G!

This is the second prize from the SGN PRIDE21 Raffle, won by Hoar / @AmandaTLevi, who is now the proud new owner of this beautiful ship. Thank you all for participating in our 12th Stonewall Pride Weekend Festivities, thank you for donating all these great prizes for the Raffle and our Stonewall Credit Store, and congratulations to all you winners. We hope you had fun and we would be glad to welcome you next year, when we boldy go where no queer has gone before...
6 people liked this
Edited July 19 2021 by TLara 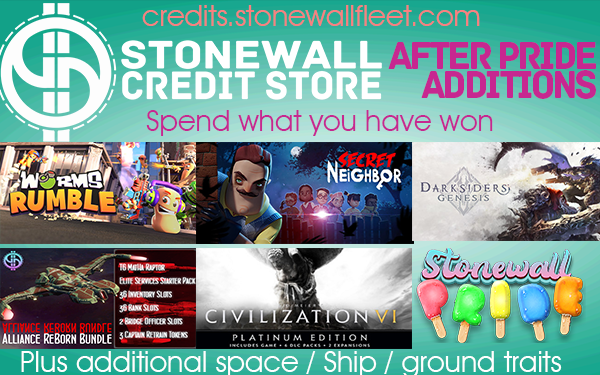 If you attended #Pride21 you may have won some SWCs (stonewall credits)
These are credits that get added to your personal wallet on your profile here on the site.

To see your wallet..
- Click on your profile picture at the very top of the page (blue bar)
- Select "wallet" to see how much you have earned.
on that page you will also see a link to the Stonewall credit store, where you can buy anything you like with these credits!

Just added a few more Steam games to the list.. take a look to see what you can get with your SWCs!!

Thanks for all who donated to the #SWCstore

We had a great turn out for the murder mystery, of who stabbed Dave to death. Our investigators scoured the Fleet Starbase looking for clues and questioning the suspects. In the end, KnightChucky, @DanaDark, and @laceyrand deduced that @robertjaneway had gleefully stabbed Dave to death, while laughing manically no doubt. Congratulations to all the winners and thank you to all my suspects for helping out.
6 people liked this 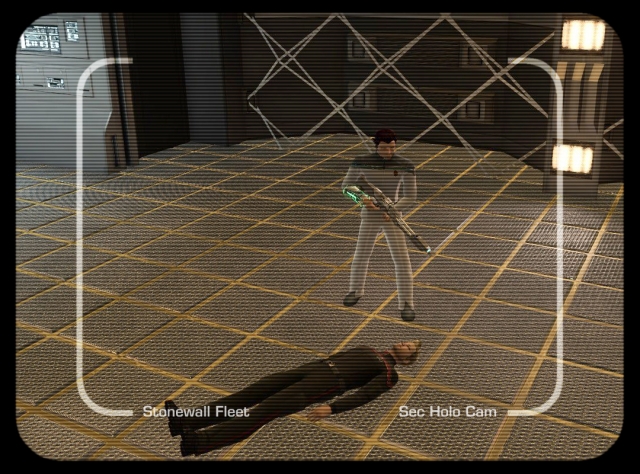